In 1962 the Scottish Peat and Land Development Association propsoed a national Land Development Board for Scotland. The aim was to reclaim land that that had once been farmed but from which over time the people who cultivated it had drifted away or been drive off. Behind proposals like this is a realisation that the natural state of the massive land area of the Scottish Highlands is not bleakness. The following extract of a magazine article by Harry Laing some years ago explains that other options are possible. 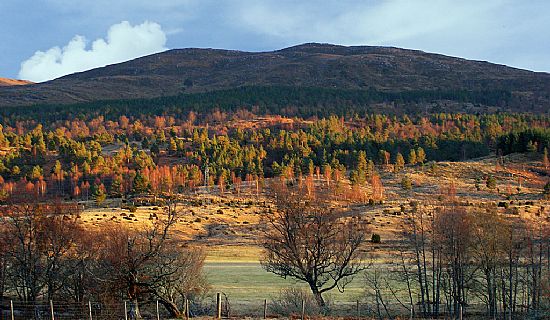 The Central Highlands of Scotland have a very barren kind of grandeur about them. Vast open spaces are patched with soft browns and greens; when the heather's out in August the place is covered in a deep purple. Many of those who come here assume that it is an unspoiled wilderness, that the Highlands have always looked this way. And if they live in the comfortable chequerboard landscape of Lowland Britain it is all the more thrilling to gaze on the clean sweep of moor, hill and crag; the clean, largely treeless sweep. But this wilderness is neither unspoiled or natural. It is very man made.

The Highlands were once covered in trees. Today one can see only remnants of the native forest; a patch of birches clinging on in a gulley, the odd dome-headed pine, a rowan, perhaps a few alders down by the river. It has taken a long time to clear the trees, centuries in fact, but now Scotland is down to a shameful 1.4% of native forest. Perhaps we should be wary of pronouncing on the destruction of the Amazonian Rain Forest when faced with facts like this.

But, aren't there millions of trees being planted in the Central Highlands? Indeed there are, both by the Forestry Commission and private forestry companies. And they are of quite the wrong kind. In many places the blanket peat cover is being replaced by a monoculture and a harmful one at that. Once a Sitka Spruce plantation has been established virtually nothing will grow either beneath or flourish within it. Most importantly, that most basic and precious resource, the soil, is not improved by an acidyfying layer of needles, neither is the water-system by acidic run off. All the more heartening then, to meet someone who's planting the right kind of tree, broadleaved, in what most of us would consider to be the wrong, or at best a very difficult, place.

I talked to this Scottish tree man, Ron Greer, over lunch in a Pitlochry pub and found out that he works in the Fresh Water Fisheries Laboratory just outside the town. Some fifteen years ago he became involved in a study of the Arctic Charr in Highland lochs. It was found that there were similarities between Scandinavian lakes of a comparable climatic and environmental zone that were being used for hydro-electric purposes and Scottish lochs used for the same thing. In both cases the fluctuating water-level or 'draw-down' had negative effects on the fish population. Loss of organic material in shallow water had led to a reduction of detrivores, one of the major parts of the fish diet. And organic material, as provided by shed leaves washed into the loch, was in short supply. At about the same time as the fish study, Ron became aware of just how much destruction had been wrought on the natural forest of the Highlands over the years and decided to do something about it.

Planting round Loch Garry
Ron started planting in 1974 after he had persuaded the landowner to let him have a go in the surrounds of Loch Garry, seeing this as one way of getting some organic material back in the loch. He had no financial support and no experience of planting trees. So he found himself hicthing lifts with begged and borrowed trees and fencing material the twenty miles from his home to the site. Considering the conditions that can prevail in this sub-arctic climate, it was a hazardous undertaking. But not only did Ron have stamina, he had the ability to persuade others this was the right thing to do. And it is entirely due to his dedication that a now flourishing body, the Loch Garry Tree Group, came into being.

It started in a small way with friends of Ron whom he'd persuaded to brave the weather, get out there and dig holes. Fifteen years on, the group is eighty strong with a membership whose age ranges from six months to eighty-nine years old. And as their business is tree-planting only those who can go and do it, i.e. mostly locals, can be full members; those who want to join from further away have to be content with being associates.

Ron has learnt by trial and error over the years that inadequate fencing is disastrous and has developed some expertise at protecting his precious stock. He has also discovered what grows best and has selected those trees which fit into the ecology of the place. He used to have some non-native plots but they're all native now: rowan, red and grey aldee, Swedish whitebeam, willow have all been planted, and amazingly, at an altitude of 1400 feet, a sessile oak is flourishing.

Or is it so amazing. Ron admits that since he began his labour of love his perception of the Highland environment has changed greatly. By comparing this stretch of the Grampians to areas of Norway and Iceland with similar climatic and environmental charcacteristics, he has come to realise that the 'unspoiled wilderness' is a nonsense. There is no reason at all why broadleaved trees may not flourish in a sub-arctic climate so long as they can be protected from sheep and deer. And once they become established the degradation of the soil will be halted, the formation of peat stopped, podsoils broken up and erosion kept at bay.

Nine years ago, Ron planted seven Alaskan lupins near the shore of the loch. A strange thing to plant, you might think (though no stranger than the much planted alien conifer from those parts), but they have established themselves and now flourish over an area of 40 square metres. And what they have done is considerable: providing copious leaf litter (organic material for those detrivores) creating 15-20 cms of reasonable soil, attracting earthworms and butterflies.

But the most exciting thing is, in microcosm beside Loch Garry, Ron has shown that a degraded upland soil can be improved, and relatively quickly. Natural regeneration of birch will do this but nothing like as fast or efficiently. And it is soil that is the basic resource. Degrade soil, let erosion take hold and you end up with nothing more than wet desert.

Harry Laing's article, 'Reforesting the Highlands', was published in the magazine Resurgence, issue 140. 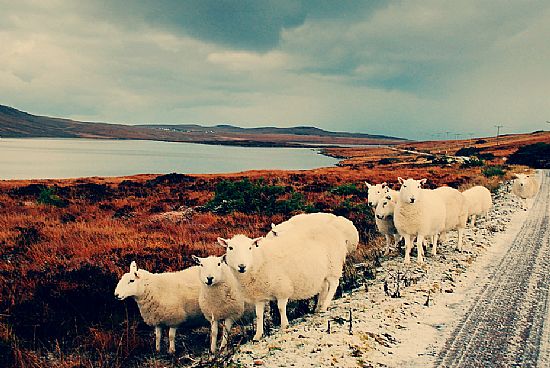 A section of Robert Robertson's book A Cracked Cornucopia, describing the work of Ron Greer and Derek Pretswell, notes the implications and opportunities for hill faming in fresh approaches to land use. Iceland turns out not be a good example, as it has lost much of its forest through the presence of so many sheep. But there are better models.

In the study of land use, Norway is a more promising land to turn to because:

1. Land is owned, typically and optimally, in vertical strips from road to fjord to mountain tops. The farmer-owners manage the land so that each horizon contributes in its own way and season to the economy of the farm. Most farmers have their own patch of timber for housebuilding and are members of a cooperative sawmill where the wood is cut and seasond for their own use or for sale.

2. Sheep and cattle are in-wintered in buildings which might at first be mistaken for hotels. At one end the silage is stored under the roof. (No hideous blue silos there.) The silage is automatically moved along to the animals.

3. The sheep spend months a year indoors. They are never allowed to be snowed under. The breeds and crosses are chosen to give fine wool, but more attention could be given to eating quality. In Scotland, though, in-wintering sheep is officially frowned upon even though the Best Farmer of the Year, voted this by other farmers one year, had converted his farm to this system. RUI has looked into the cost of converting existing buildings for this pupose.

4. Agricultural advisers live and work in every rural community. They far outnumber those available in Scotland.

5. Family farms tend to be held in perpetuity. Even if the head of the family finds an important post in a city he had leave to attend to the farming in spring and autumn. They often provide for visitors. I stayed once with the Prime Minister, who welcomed me at breakfast. 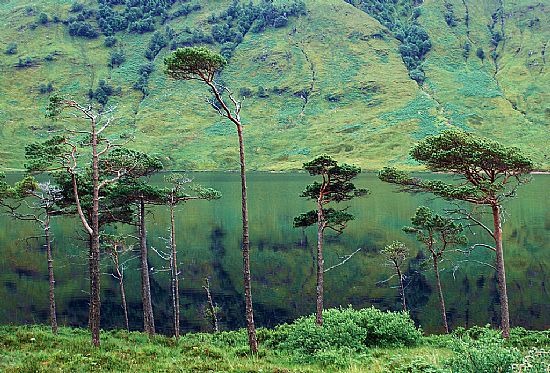